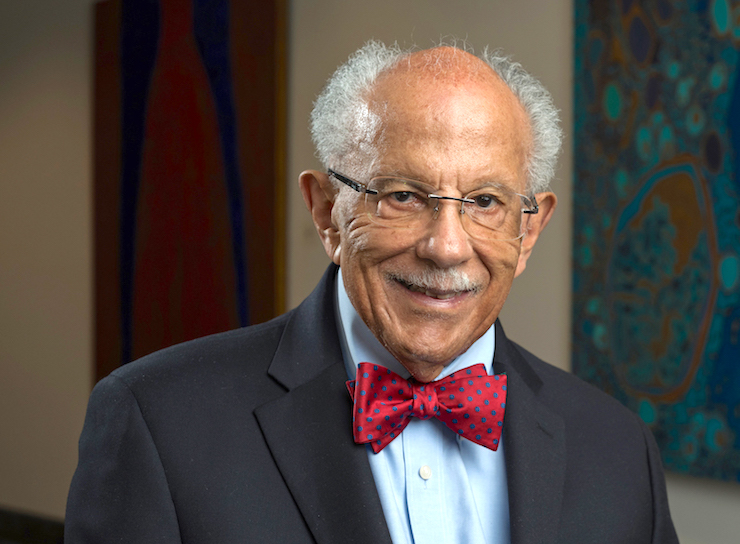 The College of Science is thrilled to welcome back pioneering climate scientist Warren Washington (’58, ’60) to present the Fall Distinguished Lecture on Friday, October 11, 2019. Dr. Washington will discuss “The Historic Development of Climate Models and Geoengineering of the Earth’s Climate.”

The lecture will begin at 5:30 p.m. in the Construction and Engineering Hall at the LaSells Stewart Center. A reception welcoming Dr. Washington will be held at 5 p.m. Both events are free and open to the public.

Washington is a Distinguished Scholar at the National Center for Atmospheric Research (NCAR) in Boulder, Colorado, where he has spent his entire professional career. After completing his bachelor’s degree in general science and his master’s degree in meteorology at Oregon State, he continued on to Pennsylvania State University where he became the second African American to complete a Ph.D. in Atmospheric Sciences.

A Portland native, Washington was first recognized for his work that began at NCAR where he developed global climate models to predict the future impacts of climate change. Using the laws of physics, his team created pioneering computer systems that could simulate changes in the global atmosphere, land and oceans with unprecedented scope and accuracy.

Washington’s early models enabled scientists to calculate the impact of increasing greenhouse gas emissions and were instrumental to the findings of the 2007 Intergovernmental Panel on Climate Change assessment report, which was awarded a Nobel Peace Prize.

His principles have withstood generations of technological advancement and are still fundamental to atmospheric science today.

Since then, he has built an international reputation as a leader in climate science. More than a pioneering researcher, he sought to share the critical findings of his work with those who can make the most difference. Washington has had Presidential appointments under the Carter, Reagan, Clinton, and Bush Jr. Administrations, and served as Chair on the National Science Board from 2002-06. In 2010, President Obama awarded him the National Medal of Science, the highest science award in the nation.

This year, the College of Science has awarded Washington the 2019 Lifetime Achievement in Science Award for his remarkable achievements that have brought “honor, distinction and visibility” to the university.

“Warren Washington is one of our most accomplished alumni. He fundamentally changed the way that we understand global climate by using computer modeling. Today, he makes us proud as an OSU alumnus by taking his message of climate change beyond the scientific community,” explains Roy Haggerty, dean of the College of Science.

Earlier this year, Washington was co-awarded the Tyler Prize for Environmental Achievement, often referred to as the Nobel Prize for the Environment,” along with well-known climate change expert Michael Mann, Washington is the first African-American to receive the prize in its 46-year history.