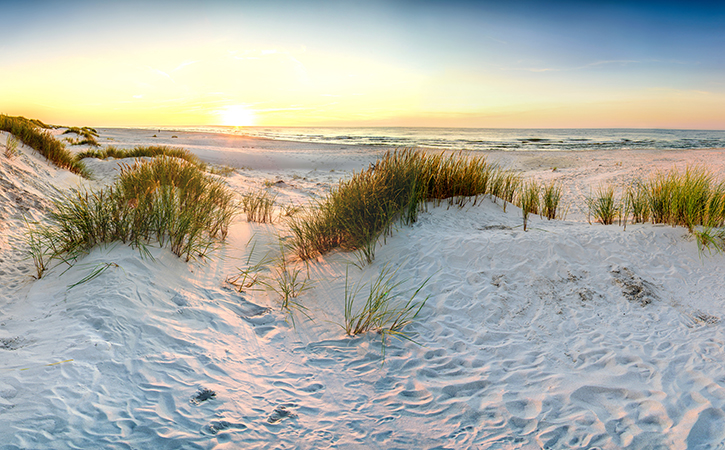 For many Oregonians, it is hard to imagine an ocean without the beautiful, undulating sand dunes that border much of our coastal waters. Strikingly beautiful and inviting, these sand dunes serve a critical role in protecting delicate coastal ecosystems and provide habitats for numerous species uniquely adapted to the environment.

While dunes play a vital role as a buffer for many coastal communities, unfortunately, they are far from indestructible themselves. Coastal storms can generate powerful wind and waves, speeding up sand dune erosion and causing breaching and even destruction. This is particularly relevant at a time when scientists are growing more concerned with impending sea-level rise, as well as increasingly devastating hurricane seasons.

In a NOAA-funded project, Sally Hacker in the College of Science helped lead a team of scientists to develop a better understanding of the complex processes behind dune formation and evolution. Other project leaders were Peter Ruggiero in the College of Earth, Ocean and Atmospheric Sciences and Laura Moore at the University of North Carolina.

Coming at the problem with an interdisciplinary approach, the team used Hacker’s expertise in shoreline dune grasses, Ruggiero’s decades of research on wave formations, as well as Moore’s expansive research on aeolian transport in desert (and now coastal) ecosystems. Together the team led a project to develop a new mathematical model known as Windsurf, that is able to accurately predict the evolution of the beach profile, taking into account the effects that beach grasses, aeolian transport, and ocean processes have on building and retaining sand.

The team has expanded their model and put it to use in another modeling framework known as the Coastal Recovery from Storms Tool (CReST). With this new development, they are able to monitor the impact of climate change on a range of coastal ecosystems, which can assist them in determining the beach nourishment procedures, such as planting more dune grasses, that will be most effective in slowing the damage.

Although the project has focused on the coastline in North Carolina where yards of coastline have already been set aside for research purposes, Oregon State scientists are hopeful that the work can be expanded to the West Coast in the near future. As climate change dangers continue to loom nearer, this work is only becoming more vital to coastal ecosystems and communities around the world.