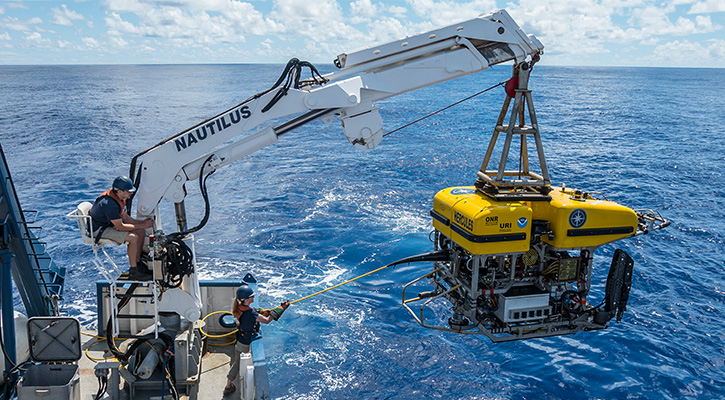 Megan Cook has had a fascination with the ocean since forever, despite her land-locked childhood in Boise, Idaho, a 606-mile drive to the nearest edge of the Pacific Ocean along Oregon’s coast. She decided early on that she wanted to have a job that involved the ocean.

“My first-grade teacher integrated the ocean into all kinds of things we learned. I remember drawing [ocean] currents with crayons, doing math with shells and so I just sort of got jet fuel for the curiosities that I think play out in many young kids who want to become marine biologists.

“As I continued in school, I realized I liked science because I got to play with that curiosity idea, being able to search for patterns and understand things about the world,” said Cook.

Cook will receive the College of Science 2019 Young Alumni Award on October 10, a tribute to her storied career to date, building a diversified international career spanning research, marine operations, media communication and ocean education. The award publicly recognizes alumni for extraordinary professional accomplishments achieved early in their career that bring credit to the College and the University.

Since graduation, Cook has worked across depths, researched coral reef ecosystems, coastal oceans and the deep sea, promoted ocean literacy, and made films as a diver. She has served as Director of Education for the nonprofit I Am Water Ocean Conservation Foundation in South Africa where she taught personal development and marine conservation through freediving and even worked as a submarine copilot. 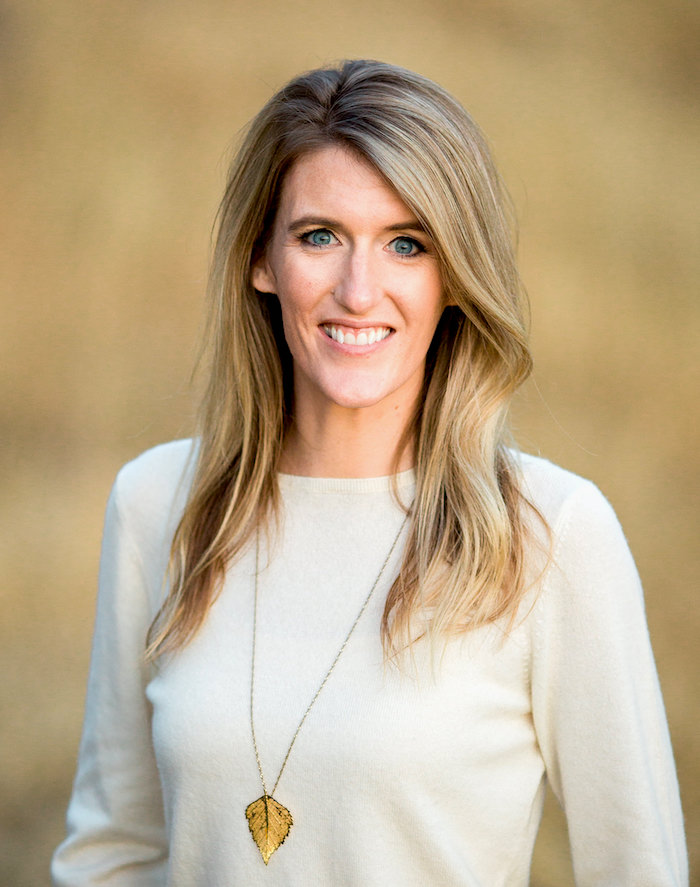 Reflecting on her time at OSU, Cook says: “What I think is remarkable is that although OSU is a big school, I found opportunities and support to have a ton of personal, really impactful experiences. I did undergraduate research which I think I got the gumption to go for from a seminar class where they told us if you’re interested, then you should just go and knock on a professor’s door.

“So I went and saw [then-Professor of Zoology] Mark Hixon as a freshman, and he said in the kindest way possible, ‘Come back when you’ve taken a few more classes,’ ” laughs Cook. “I continued to schedule meetings and ask for opportunities, maybe pester him, and eventually I got the foot in the door. I think we talk about the foot in the door sometimes being this glorious moment—like somebody just waves a magic wand and poof now you’re a scientist—but the foot in the door is often doing something small. I had the chance at first to help by doing QAQC (quality assurance and quality control) of data entry spreadsheets, but it was a first step.”

Despite a strong family connection to OSU—her dad was once a basketball coach for the Beavers, Cook was reluctant to follow the expected path, preferring to chart her own course. But then “showed up on campus and completely fell in love with the place.“

“I just loved passing on that first-impression feeling, that same honesty of ‘College is a big decision. You need to go with your gut. You need to be at a place where you feel like you’re going to be successful. And here’s a bunch of reasons why I think that OSU can be that place for you’. ”

During her first term at OSU, Cook recalls a freshman biology seminar with its spirited conversations about all the things students can do with a biology degree and that helped her hone in on the field of ecology appreciating the way it was a field full of connections and networks.

“They talked about all the things you can be part of on campus, the different departments and specialties in the college, ways you could spin this degree and really take it where you wanted. I arrived on campus very much like ‘marine biology is the path for me’. Now I spend my professional life speaking about STEM careers making sure kids know that marine bio is not the only possibility that can lead them to the ocean.”

Diving in and finding her sea legs

“My work in Hixon’s Lab turned into a really great mentoring experience. By my junior year, I applied for and received undergraduate research funding to spend the summer working with his lab in the Bahamas giving me hands-on field experience, or I guess ‘fins-on’ because the projects were scuba diving based underwater ecology work! As a student, I received professional training while doing field operations, worked for a scientific diving certification, chose to study abroad. So even in this really big place, I felt like everyone made sure I knew there was this menu of possibilities, and I found support to make them possible. I love that aspect of having studied science at OSU.”

Friends headed off to work in business, finance, health science, forestry or whatever after college would ask ‘What are you doing?’ And I wanted to be able to share something more compelling than saying, ‘Uh, I am being dragged behind a boat looking for trash in the ocean’!?”

Following her wide-ranging interests and passion landed Cook at a job in Hawaii which began just days after graduation. The job was as a marine debris diver focused critical habitat protection and marine debris management on most remote coral reefs in the world.

“My parents came to watch me walk at graduation and they took everything I had in Corvallis except the two duffels I left for Hawaii with. It was an incredible job, very hands-on. We were free diving in the Papahānaumokuākea Marine National Monument—the Northwest Hawaiian Islands—a  critical habitat for endangered Hawaiian monk seals and green sea turtles.”

Cook’s work involved freediving down to coral reefs, holding her breath, cutting discarded fishing nets off the reefs where they accumulated snagged from ocean currents and then hauling them out by hand. “To think about it from a science perspective, I was tackling an issue on the scale of global ocean circulation, or to think about it from a public perspective, I was working directly on the impacts of how we handle our trash, or at another level it was one of the all-time great fun field projects where you are driving boats, charging through surf, getting in the water every day, making a tangible difference in the world ….just incredible experiences to have so soon in my career.”

“I took the winding road, or maybe we should make this analogy oceany… followed the swell of the ocean waves?” laughs Cook. “The point is that none of this is really a direct path.”

In 2012, Cook was recognized by Our World-Underwater Scholarship Society as a North American Rolex Scholar, an award for emerging leaders of underwater fields. In her application, Cook expressed that while she was an already doing all sorts of field operations and was a trained scientist interested in pursuing that field, she also wanted to become better at telling stories about the important issues and work being done all around the world. As a Rolex Scholar, Cook spent a year under guided mentorship traveling around the world, learning new skills like cave diving and underwater photography which put her literally in the waters of 17 countries as well as Antarctica. The experience not only further cultivated her love of storytelling, but it also gave her a rich source of content and imagery to draw on.

Giving voice to the ocean

The undercurrent that runs through Cook’s jobs is storytelling. She is a natural and effervescent storyteller, relishing in the ability of stories to connect people and to help make sense of the world and, specifically, the ocean. “One of my great talents in this space is I’m good at getting other people excited about things I’m excited about,” said Cook. True to form, her Twitter profile dubs her an “Enthusiasm Volcano.”

Her life’s mission remains helping people “fall into fascination with our planet” and use technology to bring people to the “soggy parts of Earth.”

“My science storytelling interest comes from wanting to share my own experiences with my closest people, my friends and family. I was spending my life in beautiful places and having the most remarkable experiences that were totally changing my perspective about all I learned and what I’d seen. I needed to find a way to help other people relate to that. Friends who were headed off to work in business, finance, health science, forestry or whatever those first years [after college] would ask ‘What are you doing?’ And I wanted to be able to share something more compelling than saying, ‘Uh, I am being dragged behind a boat looking for trash in the ocean’!?” laughs Cook.

As a leading storyteller for the oceans, Cook brings the science of the oceans to people around the world, giving her work a global reach. In her position now with Ocean Exploration Trust exploring previously unseen parts of the deep ocean, the science communicator delights in bringing cutting-edge discoveries to fresh eyes through social and traditional media, live streams and public communication in live broadcasts, as a keynote speaker, as well as through K-20 outreach efforts. Cook sees the emergence of science communication as an important part of science and one of the critical areas for the field in the future.

“In the past decade or two, I’m proud to see there has been a bigger push around the idea that science and society are not separate from one another. There are many science stories to be told that relate to policy, or to the community, and that bring in new perspectives whether from indigenous people or local stakeholders. I’m excited by place-based science and storytelling, the idea that you can’t do science without talking to the people that it’s most relevant to.

Currently, Cook works as an ocean explorer and science communicator. As the Manager of Education Partnerships and Programs for Ocean Exploration Trust, she inspires the next generation of explorers by bringing the excitement of discoveries via live broadcast expeditions on the seafloor to millions of eager minds. Her life’s mission remains helping people “fall into fascination with our planet” and use technology to bring people to the “soggy parts of Earth.”

Although Cook lives in Friday Harbor in the San Juan Islands, Washington, she is perhaps most at home in the deep, dark corners of the ocean, the largest ecosystem on our planet. She spends her days working with her team and ship Exploration Vessel Nautilus to understand the 95% of the ocean that remains unexplored.