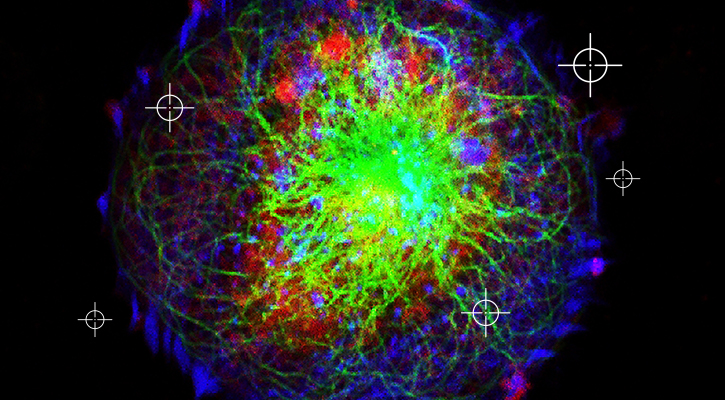 Whether it happens among scientists in the laboratory, out in the field or in the classroom, innovation is rooted in creativity. Our scientists envision what is possible through imagination, research and inspired problem-solving, and turn their groundbreaking discoveries into solutions of high value to society.

An incubator for innovation, the College is strengthening pathways for scientists and partners to develop their ideas into solutions that meet needs in the market to address the world’s pressing challenges. Such discoveries make their way into the economy. The drive to strengthen and build a culture of innovation in the College of Science is the primary goal of our new Science Research and Innovation Seed (SciRIS) Program. Launched in 2018, SciRIS provides seed funding to research projects that are high-impact, collaborative and that cut across disciplines, and drive research toward addressing societal and marketplace needs.

“Innovation is the application of research to benefit society, whether by driving economic growth, discovering solutions to pressing problems or uncovering insights about life and the universe,” said Roy Haggerty, dean of the College of Science. “Strategic innovation takes research from the lab to the market and ultimately to society. Fostering innovation benefits everyone.”

Scholarship that disrupts the status quo, makes a positive impact on people’s lives and the planet, and addresses marketplace needs is not a new concept for science faculty.

Many of our scientists are bringing high-value solutions to bear in the pharmaceutical, biotech and agrochemical industries. One such example is Professor of Chemistry Rich Carter who discovered a novel process that allows chemical manufacturers to readily add fluorine to other molecules. Carter’s groundbreaking discovery led to his co-founding of Valliscor, a thriving startup based in Corvallis. Its lead product, bromofluoromethane, gives pharmaceutical manufacturers a more cost-effective way to make fluticasone propionate, a key ingredient in widely used asthma inhalers such as Flonase.

Other faculty are conducting research in material science for application purposes. Distinguished Professor of Chemistry Doug Keszler’s spin-out company Inpria designs a new kind of photoresists, a chemical film used to lay down the patterns for printed circuits in semiconductors that unlocks the full potential of EUV lithography. Founded on NSF-funded materials research, Inpria was named one of the “10 startups to watch” by Chemical & Engineering News in 2016. Its solution, which has attracted major attention and funding from big-player tech companies, enables smaller and more precise circuitry for a new generation of computer chips.

In the spirit of our hallmark collaboration, some scientists in the College are honing in on critical block-building discoveries from their colleagues. To illustrate, Distinguished Professor of Physics Janet Tate tackled the emerging need for more efficient conversion of solar energy and light emission for a new kind of semiconductor. Her revolutionary research on the properties of the p-type semi-conductors paved the way for the development of Apple’s newest retina display monitor by other scientists, including some at OSU.

The world is changing at an ever-increasing speed and the College of Science is entering a period marked by a growing need for expedient progress in science and technology. The tough challenges we face in the 21st century demand collaborative, multi-disciplinary solutions and radical innovation. Built on a foundation of extraordinary successes over the last decade, our momentum is growing. We invite you to learn about a few of our innovative scientific breakthroughs.

Paving the way for a new source for leukemia drug
Chemist Christopher Beaudry and team patent a method for making anti-leukemia compounds that until now have only been available via an Asian tree.

Proton transport ‘highway’ to better batteries
Chemist Xiulei (David) Ji and his team have found that a chemical mechanism first described more than two centuries ago can revolutionize energy storage.