Doctoral student Ana Arteaga was one of three graduate students at Oregon State to receive a 2019 GEM Fellowship. Two doctoral students in the School of Electrical Engineering and Computer Science in OSU’s College of Engineering also were named National GEM Consortium 2019 Fellows this year. This year, the National GEM Consortium supported more than 175 graduate students across the country.

Founded in 1976 at the University of Notre Dame, GEM’s mission is to enhance the value of the nation’s human capital by increasing the participation of underrepresented groups (African Americans, American Indians and Hispanic Americans) at the master’s and doctoral levels in engineering and science.

The GEM Fellowship supports students pursuing doctoral degrees in the natural science disciplines — chemistry, physics, earth sciences, mathematics, biological sciences and computer science. Students can be accepted into the program as early as their senior year.

Ana Arteaga at her internship at Pacific Northwest National Labs this summer.

The Science Fellowship offers generous financial support including full tuition and fees, an annual stipend of $16,000 in the first academic year of the fellowship with the University providing a living stipend up to the 5th year of Ph.D. program, and a minimum of one paid graduate-level, summer internship through with a GEM Employer. Students are matched to the specific technical needs of the employers based on their specific skill sets. More than 80% of the students accept full time offers from sponsoring employers.

Arteaga, who works in the May Nyman Lab conducting nuclear research, worked at Pacific Northwest National Laboratory (PNNL) this summer gaining valuable experience in a scientific setting working alongside top researchers. At PNNL, she worked as part of the on the Nuclear and Radiochemistry Team under the National Security Directorate under the guidance and mentorship of Robert Gian Surbella, a 2017 Linus Pauling Postdoctoral Fellow, and Jon Schwantes, a senior scientist and Nuclear Security Leader.

“The first project allowed me to translate the skills I learned during my Ph.D. to a completely different research area, which was amazing!” said Arteaga.

Arteaga was exuberant in her praise for both the experience at PNNL to work on inorganic chemistry and nuclear forensics projects as well as the opportunity to learn from highly talented scientists. 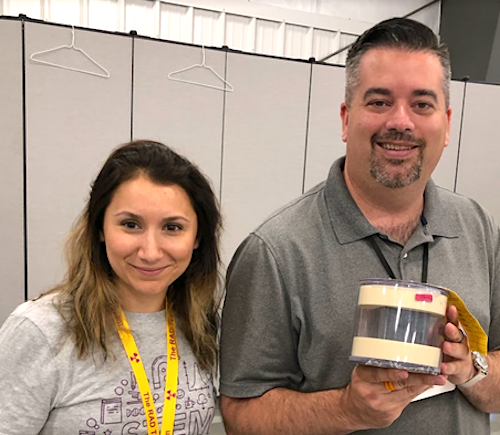 “Overall it was a great experience! I had two projects, an inorganic synthesis project working with Lanthanide Metal-Organic Frameworks and a nuclear forensics project working with a German uranium cube from World War II. The first project allowed me to translate the skills I learned during my Ph.D. to a completely different research area, which was amazing!” said Arteaga.

“The second [project] gave me an insight into the world of nuclear forensics while also allowing me to combine my two passions, chemistry and history. I was able to work with amazing and talented scientists, doing cutting edge research in a fast-paced environment.”

OSU chemistry alumnus Collin Muniz (BS, ’17) was also named a 2019 GEM Fellow and spent his summer doing an internship at Lam Research Corporation, a company based in Fremont, California, that is engaged in design, manufacture, marketing, and service of semiconductor processing equipment used in the fabrication of integrated circuits. Muniz, who got his start in the Nyman Lab, is currently pursuing a Ph.D. at the University of Southern California.

Arteaga has had an unconventional path to her current status as an accomplished young scientist. A first-generation college student, she arrived at Oregon State University in 2015 to begin a Ph.D. in chemistry but with a substantial record of undergraduate research in chemistry, including high-quality publications at the University of California-Merced. Arteaga successfully navigated numerous challenges and was able to distinguish herself as a committed scientist and leader. Read more about Arteaga’s unique and impressive path to chemistry.

The award-winning communicator won her the 2018 SACNAS Graduate Student Presentation Award, which is given to the top nine percent of participants. She was also instrumental in helping the OSU SACNAS chapter obtain the 2018 Role Model Chapter in the category of Outstanding Community Outreach for Native American Activities.

SACNAS (Society for the Advancement of Chicanos/Hispanics and Native Americans in Science) is a society of scientists dedicated to fostering the success of Chicano/Hispanic and Native American scientists—from college students to professionals—to attain advanced degrees, careers, and positions of leadership in science.

The National GEM Consortium has graduated over 3,000 researchers, professors, entrepreneurs, inventors and business leaders, including more than 200 men and women with doctorates in the physical sciences, life sciences and engineering. GEM provides a large network, financial support, and expert knowledge to help ensure student success in competitive academic and professional environments, connecting highly qualified graduate students to 150 universities and industry leaders across the country.