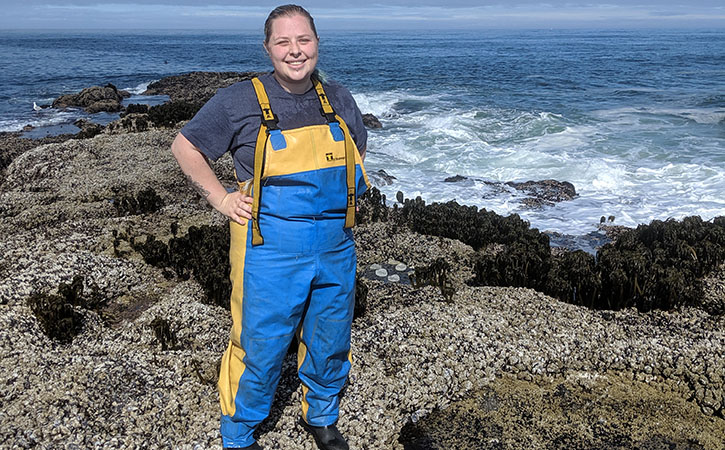 Chantelle MacAdams, one of Oregon State’s 2019 SURE Science Scholars, was in her mid-twenties when she returned to Oregon after a year of living in Australia and Southeast Asia and discovering along the way a passion for scuba diving and oceans. She had previously attended community college in Portland—without finding a career path that called to her—before she grew tired of office jobs and decided to sell her belongings and head overseas.

While in Australia, MacAdams was so drawn to the ocean that she applied to marine biology programs at OSU and the University of Queensland even though, she recalls, she had never met a female marine biologist. “Everyone knows who Jane Goodall is, but they probably cannot name any women in marine biology.”

Now 30, MacAdams will graduate in June 2020 as a zoology major with marine biology and ecology minors in the College of Science. Her path to graduation was not a straight shot. At first, she had a hard time seeing herself in a science career as a queer woman and a non-traditional student until a close friend asked her why she wouldn’t want to pursue a career she was passionate about. Until going overseas, she had not realized her passion for oceans and ecology. “I had lived in Oregon almost my whole life, where many people are connected with the ocean, but I never recognized quite how much the ocean had been a big—and fun—part of my life.”

MacAdams chose to pursue her newly identified career path at OSU instead of in Australia for various reasons, including having family nearby, a new spouse and close proximity to the Hatfield Marine Science Center. She heard about the SURE (Summer Undergraduate Research Experience) Science program through Gabrielle James, program coordinator, who she had worked with as a Peer Mentor in the College’s Science Success Center. James encouraged MacAdams to apply for a SURE Science scholarship since she had a strong interest in field science. Through this undergraduate summer research program, MacAdams could do a trial run conducting 13 weeks of paid field science for the summer “to make sure it’s what I really want to do in my career.”

MacAdams had the opportunity to develop her own research project as part of the SURE Science program. After considering a sea anemone project with the Virginia Weis Lab, where she had previously volunteered, she decided instead to pursue research with a broader ecology focus in the Lubchenco-Menge Lab. MacAdams’ project team included faculty mentors Bruce Menge and Sarah Gravem as well as Ph.D. candidate Silke Bachhuber and faculty research assistant Jonathan Robinson.

“I want my science and my education to be helpful in the fight toward a future that is habitable for us all so I think that anything I do in my life and career will be entwined with climate change. It’s a heavy thing to live with … the only way I can really feel good about my place in the world is to do what I can to help.”

MacAdams’ research explored the effect that small predators had on mussel populations in an intertidal community in an effort to find out if small predators could compensate for the loss of a keystone species such as Piaster ochraceus, after Sea Star Wasting Syndrome decimated its population along the West Coast in 2014. Using photo analysis from visits to intertidal field sites along the Oregon coast, MacAdams was able to confirm the role small predators could play after the loss of a keystone species, which may become more common as climate change progresses.

The SURE Science experience left MacAdams with no doubt about fieldwork and science being the right path for her. The highlight of her experience, she says, included beautiful sunrises, outdoor work, finding creative solutions to unique problems, and building relationships that she hopes will help her throughout her career. MacAdams’ project has also opened up opportunities for her to make presentations about her research. In November she will present at State of the Coast, an annual coastal conference organized by Oregon Sea Grant, one of 33 state programs within the National Oceanic and Atmospheric Administration’s Sea Grant College Program. The program addresses regionally and nationally strategic issues through research, outreach and ocean and coastal education.

As for the future, MacAdams plans to apply to graduate programs in marine ecology with a focus on zoology and biology at universities located as close as California and as distant as New Zealand, Australia and Europe. She’s not certain yet about the precise career path, but she hopes it will include a considerable amount of fieldwork, and she knows that climate change will figure into her path no matter what she chooses.

“As a millennial, I definitely think about climate change a lot since I’ve seen it progress this far and will be alive to see many of the effects of climate change continue escalating. I want my science and my education to be helpful in the fight toward a future that is habitable for us all so I think that anything I do in my life and career will be entwined with climate change. It’s a heavy thing to live with … the only way I can really feel good about my place in the world is to do what I can to help.”

As busy as she is with her studies, MacAdams has not put aside the scuba diving she first began in Australia. In fact, she’s planning to get Rescue Diver certification at OSU this month in order to move on toward Scientific Diver certification. She’s also exploring master’s and Ph.D. programs that include diving projects.

“I have a lot of interests, but most of them are related to the ocean, so I’d be happy doing almost anything as long as it relates to that,” MacAdams adds.