“This work all started in a very peculiar way…” Kyriakos Stylianou begins, his eyes shining as we get to the point in the interview he has been waiting for. The chance to talk about his groundbreaking research that has been published in the December edition of Nature Magazine. 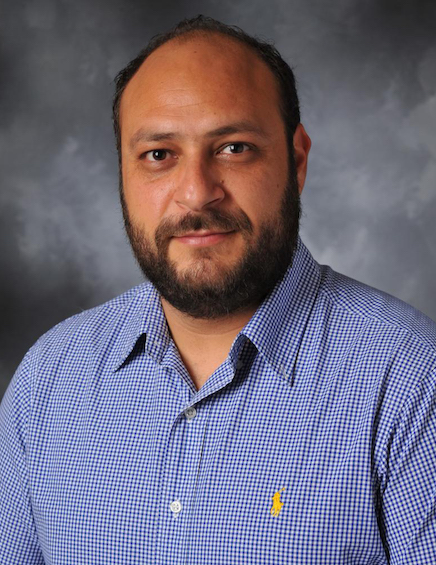 The Terence Bradshaw Chemistry Professor at Oregon State, Stylianou has been studying materials science since he began his Ph.D. at the University of Liverpool in 2007. His work has resulted in papers published in prestigious journals and several awards including the Marie Curie Fellowship in 2012. At OSU, where he joined as an assistant professor in 2019, he hopes to continue his longstanding work on metal-organic frameworks (MOFs) and share his passion for research with his students.

“I would like to start mentoring and supervising students, and hopefully develop the new leading scientists of the future,” says Stylianou.

MOFs are porous, crystalline materials that are composed of metal ions and organic ‘linker’ molecules known as ligands. Their intelligently designed composition results in a hollow cage-like structure that is extraordinarily useful for a variety of applications. Their structure can be fine-tuned for different applications by changing the size or composition of metal ions or ligands. Even now, scientists like Stylianou are only now beginning to scratch the surface of what these MOF materials are capable of.

“We were having lunch with one of my colleagues, [Peter Boyd], and discussing the problems in our world and how we can tackle them,” Stylianou continued. “Pete mentioned that he had developed a library that included over 325,000 MOF materials. He had screened these materials to identify an active site to capture CO2.”

One of the main challenges scientists working with MOFs experience is water solubility. In nearly every case, when MOFs come into contact with water, they either hydrolyze and break down, or are attracted to the water ions which outcompete CO2 for adsorption. Previous carbon capture experiments had required drying the gasses before filtering out CO2, a time consuming and expensive process.

“I would like to start mentoring and supervising students, and hopefully develop the new leading scientists of the future.”— Kyriakos Stylianou

Among the 325,000 MOFs that were screened, only two were identified that would remain stable in the presence of water, and were the right size and polarity to bind with CO2 and not with water.

“We were inspired by his study, and we went into the lab and synthesized the two materials which both have this active site,” Stylianou continued. “The design was perfect.”

These studies are particularly important at a time when projections for climate change due to CO2 and other greenhouse gasses are increasingly alarming. According to an October 2019 report from NASA, carbon dioxide in the atmosphere has increased 48% since the beginning of the industrial age, with one quarter of the increase taking place in the past 20 years.

In contrast to many other greenhouse gasses, CO2 is also problematic due to its longevity. Once introduced to the atmosphere, it will linger on well beyond the human lifespan, from 300 to 1,000 years. With so much at stake, developing technology to reduce the CO2 levels in the atmosphere is crucial.

By using aluminum, a relatively cheap and abundant material, Stylianou hopes to develop a product that will be cheaper and more widely available than any other product currently on the market.

“Hopefully we can combine our fundamental results and our materials with industry partners and maximize the potential of these materials,” says Stylianou.  “OSU is the right place to explore this. We have a lot of opportunities.”

A native of Cyprus, Stylianou was raised speaking Greek throughout his childhood and undergraduate years at the University of Ioannina in Greece. He went on to do his Ph.D. in materials chemistry at the University of Liverpool, England. Upon completion of his thesis, he was awarded the Marie Curie Award to work at the Catalan Institute of Nanoscience and Nanotechnology in Barcelona, Spain.

In 2015, Stylianou moved to the École Polytechnique Fédérale de Lausanne in Sion, Switzerland, where he began his independent research career as a team leader. His work in Switzerland led to many publications on the synthesis of MOFs for a wide variety of applications including hydrogen generation and water purification, as well as marked the beginning of his carbon capture research.

At OSU, Stylianou looks forward to expanding the scope of this research and making it more available to the world at large.