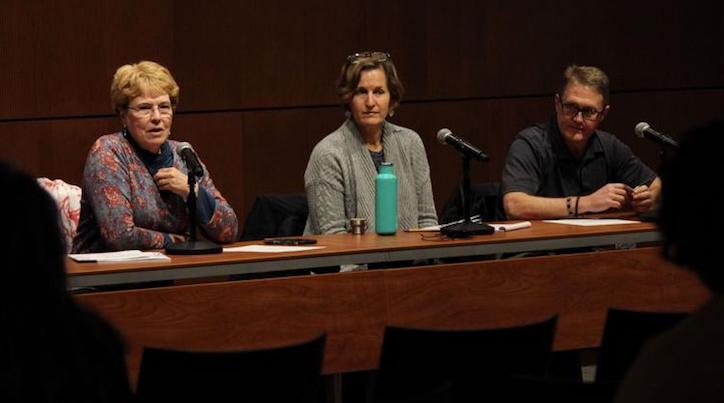 Bridging the communication gap between scientists and the public

Effective communication can be a critical tool to ensure one’s science discoveries translate to real-world breakthroughs and influence policy makers. This was the key message of a recent panel discussion hosted by Oregon State University’s Student Science & Policy Club. The panel addressed the topic: How and why should scientists communicate with the press? The panelists considered why scientists should work with the media, how to do it well, and the role social media can play in giving scientists a platform in national conversations and policy discussions.

The panel was organized by The Student Science Policy Club at OSU led by integrative biology Ph.D. student Claire Couch. “Media communication is an area that most scientists – myself included – feel woefully unprepared for by our traditional scientific training,” said Couch. “Many researchers have incredibly important messages to share with the public, but we often lack the skills and resources to make our communication efforts successful.” The panelists emphasized the responsibility all scientists have to make their science relevant, understandable and memorable for the public and decision-makers.

Lubchenco addressed this responsibility, arguing that scientists “need to be bilingual – speaking the language of science and laypeople.” Together, the three panelists provided some helpful guidance for how scientists can learn to do this.

“Stories are the currency of the media,” McLeod stated. Journalists want to tell stories, not just report on a finding, because stories are what people pay attention to.

Some ways one can share the story of their research in a way that is compelling to the public:

Often scientists feel like they need to change people’s minds, but instead, they need to find ways to connect to what people already care about. Learning to talk about one’s work using a story or clear analogies can help make scientific research more interesting, relatable and applicable for the public. One helpful tool for telling the story of scientific work is to answer the following questions:

All three panelists emphasized the importance of telling the story of the science process– inviting people, including members of media, to see that science is more than just a collection of facts, but it is a practice of exploration. This can give the public more confidence in the science and help make science and scientists more relatable.

This means that sometimes a good story is not about a finding, but about the work of doing the science – the field research to collect samples, the sights, sounds and smells of the lab, or the tense moments when you wait for results to appear on a computer screen. “Journalists are excited to be a part of the process,” McLeod added.

“There’s a general lack of trust of scientists in some circles that is very harmful,” Lundeberg stated. “To the extent to which scientists can communicate in ways that are relevant and meaningful, that can go a long way to dealing with that mistrust.”

McLeod added to this point: “Trust is combination of competence and warmth. Scientists are perceived to have plenty of competence but are often perceived to lack warmth. This is where getting to know the people behind science is so critical.”

This means that the scientist should sometimes be part of the story. Share a personal story that relates to one’s work. What led one to their field of research? What excites them?

Get your ideas out there

Policymakers do not always read Nature or Science. “Oftentimes, people don’t believe something until they see it in mainstream media,” Lubchenco stated. “Having your message in the news or on social media gives it legs and provides an opportunity to talk about an issue.”

One can develop a voice in their field beyond research publications. Each panelist emphasized the role social media plays. “A lot of journalists are on Twitter, and that’s where they find their ideas or figure out who the thought leaders are,” said Lundeberg.

Cultivating a social media presence – especially on Twitter – can connect one with a global network of peers, amplify one’s voice in a field of study and be an entry point to generate broader interest in one’s work.

Some tips for doing this well:

Social media is more than a way to get a scientist’s voice out there. “It can also be a powerful listening tool. It’s a way to understand the broader social context of your work and understand other perspectives,” McLeod added. This can help in figuring out the most compelling ways to tell the story of your research.

Communicating for a brighter future

Communicating scientific breakthroughs with the public and decisionmakers as well as scientific peers is more important than ever to ensuring real-world impact.

“Hearing from Jane Lubchenco, Karen McLeod, and Steve Lundeberg helped paint a clear picture of how scientists can bridge the gaps between research, communication, and policy. We were thrilled to host such an incredible panel of engaging and skilled science communication experts,” said Couch.

Founded in fall 2019, the Student Science & Policy Club is a group of graduate and undergraduate students, mostly from STEM fields, who are interested in engaging at the intersection between science and public policy. The club’s mission is to educate themselves and the community on the role of science in society and public decision-making, and to bring together a community of scientists who are passionate about making their science matter.

“I hope that our club can continue to contribute to university-wide efforts to equip scientists with the tools to extend the impacts of our research,” added Couch.

categories: Events, Integrative Biology, Students | Comments Off on Bridging the communication gap between scientists and the public